On October 3rd, CIE released their new position statement on non-visual effects of light, entitled "Recommending Proper Light at the Proper Time" 2nd edition. As non-visual effects are becoming more attention nowadays, confusion and uncertainties on this topic are still high in the lighting community. Much research has been done but even more research is necessary. CIE has recognized this relevant topic and already initiated an independent workshop of leading scientists in the field of quantifying light for non-visual effects in Manchester in 2013 (CIE TN 003:2015 (CIE 2015)). The CIE issued an international standard, CIE S 026:2018 (2018), that defines a system for metrology of optical radiation for light-induced responses that can be elicited by ipRGCs (ipRGC-influenced light (IIL) responses).

Light is defined as any electromagnetic radiation that can create a visual sensation by directly stimulating the retinal photoreceptors of the visual system. In addition to enabling vision, these photoreceptors also drive biological effects that powerfully regulate human health, performance and well-being. Light is the main synchronizer of the human biological clock. It can shift the phase of the circadian rhythm and can regulate the timing and quality of our sleep. Light in the evening and at night can disrupt sleep and can cause acute suppression of the nocturnal release of the hormone melatonin. There are also reports that light can increase heart rate, improve alertness, alleviate seasonal and non-seasonal depression, influence thermoregulation, and affect brain activity as measured with the electroencephalogram (EEG). Exposure to light elicits fast responses (in the range of milliseconds and seconds) in the pupillary reflex or in brain activity. To reflect their distinction from perceptual vision, these effects are often referred to as non-image-forming (NIF) or non-visual (NV) responses to light. In recent years various marketing terms, such as "human-centric lighting" (HCL), "circadian lighting", and "biodynamic lighting", have come to describe lighting solutions that target such effects. In the upcoming 2nd edition of the CIE International Lighting Vocabulary, currently available as DIS (CIE 2016), "integrative lighting" is the official term for lighting that is specifically intended to integrate visual and non-visual effects, producing physiological and psychological effects on humans that are reflected in scientific evidence. 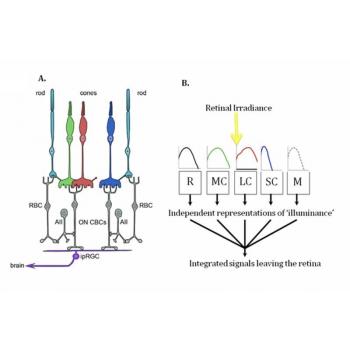