At a plugfest in Valencia, Spain, nine companies won certification for TALQ-compliant products, paving the way for interoperable smart city networks and applications from multiple vendors.

The TALQ Consortium has announced the results of a summer plugfest for smart city products held in Valencia, Spain that showed interoperability between central management system (CMS) software and network gateways from nine global vendors. The products are compliant with TALQ Version 2.1.0 and demonstrate a path forward for interoperability even if the network connections, say, to individual groups of street lights rely on different wired or wireless technologies.

The TALQ Consortium was founded in 2012 to try and standardize approaches for networking street lights and using such networks to enable smart city applications. We published a contributed article authored by the leader of the organization in 2015 that further explained an evolving mission. And the consortium ultimately adopted a protocol is based on a so-called RESTful architecture where REST implies a Representational State Transfer — an architecture developed for web services that run on top of HTTP. And the protocol relies on the widely-used JSON (JavaScript Object Notation) data-interchange format. Those concepts formed the basis of Version 2 of the standard as we explained in 2018. 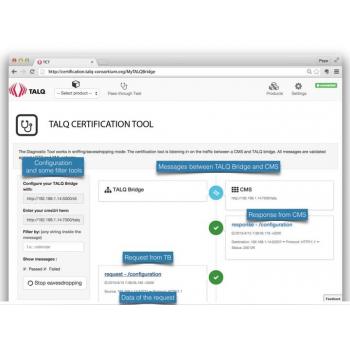